Inflation has reached levels not seen since the early 1980s.  Workers are unhappy, consumers are stretched to make ends meet, and there's a general malaise in the country.  Nearly 87% of American adults say they're paying more for groceries now than they were a year ago.  Consumer Confidence has dropped nearly 30 points since the peak in May of 2021.  Only 16% of Americans are satisfied with the current direction of the country.  It's reminiscent of the late '70s and early '80s. 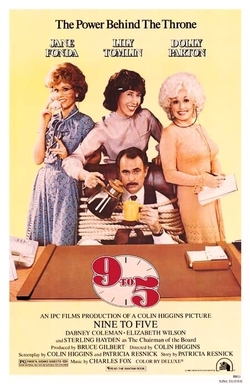 It reminds me of a time when people were writing songs and filming movies about economic hardships and nationwide angst.  The movie "9 To 5" was released in 1980 and told the story of 3 women struggling to get ahead in corporate world.  When Dolly Parton was recruited to star in the film by actress Jane Fonda, she said the would only do it if she could write the theme song for the movie.  And, she did.  The movie and the song were a hit.  The movie only cost $10 million to make and grossed over $100 million.  The song hit #1 on the charts in 1981 and sold over 1 million copies that year.  The lyrics remind of how the common worker likely feels today and how the elites are out of touch with the average American.

"Workin' 9 to 5, what a way to make a livin'
Barely gettin' by, it's all takin' and no givin'
They just use your mind
And they never give you credit
It's enough to drive you crazy if you let it"

Pour Myself a Cup of Ambition?  That's what the market has needed for some time.  Equity markets are within 5 hours of finishing the week higher for the 1st time in 7 weeks.  Dip buyers have ruled the day, still motivated by the glory days of meme stocks and crypto dominance. 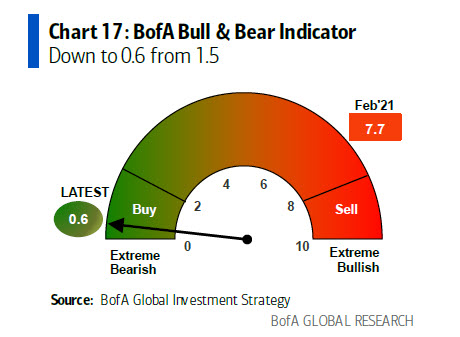 The most recent movement this week has been fueled by positive news on the tariff front and stocks being oversold.  News that the tariffs on Chinese goods could be lifted by the Biden administration helped stocks move higher.  In fact, Bank of America's Bull/Bear Indicator is at extreme bear levels, which is why we're getting this bounce.  However, this bounce is not sustainable with the cracks in the economic system now visible and the threats to future consumer spending becoming a reality.  On the bright side, this little reprieve in selling allows investors time to consolidate holdings and match gains with losses in order to prepare their portfolios for the likely recession ahead.

You Would Think that I Would Deserve a Fair Promotion.  As the data has changed, the reality of a recession has increased.  As interest rates on mortgages have risen and inflation is causing consumers to refocus spending, cracks in the Housing Market have emerged. 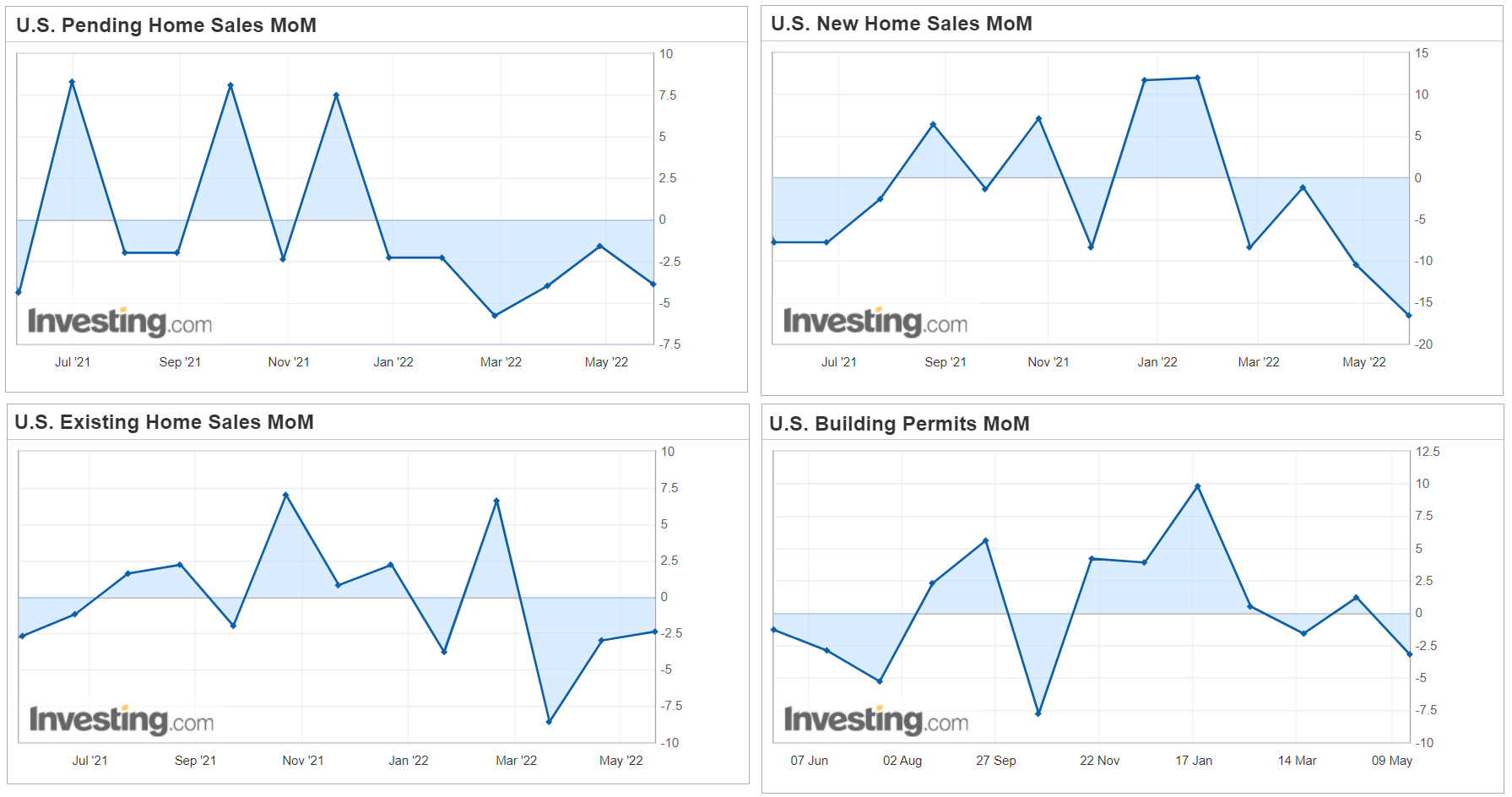 Pending Home Sales and New Home Sales showed a decline month-over-month this week.  Building Permits showed a decline last week and Existing Home Sales are still negative for the year.  Housing makes up between 15 and 18% of U.S. GDP.  While we are not seeing the type of bubble in housing which led to the 2008 financial crisis, home prices appear to have peaked in late 2020 with demand as people looked to flee high crime, high regulation, and high tax regions for the sanctuary of a private home.  Since then, the NAHB Housing Market Index has declined 23%.

Financial conditions as a whole are on the decline.  The National Financial Conditions Index (NFCI) tracked by the Chicago Federal Reserve is at the lowest level (-0.20) since the beginning of the pandemic and recent movement is reminiscent of August 2007.

We are within 20 basis points of turning positive, which would indicate financial conditions are tightening.  The last time that happened, markets sold off 25% in March of 2020.  Bloomberg's Financial Conditions Index has also plummeted since January.  We are starting to see the first big name employers signal layoffs or hiring freezes in the coming months.  Meta announced a hiring freeze that will extend through the remainder of the year.  Netflix has announced layoffs as it tries to restructure its original content division. 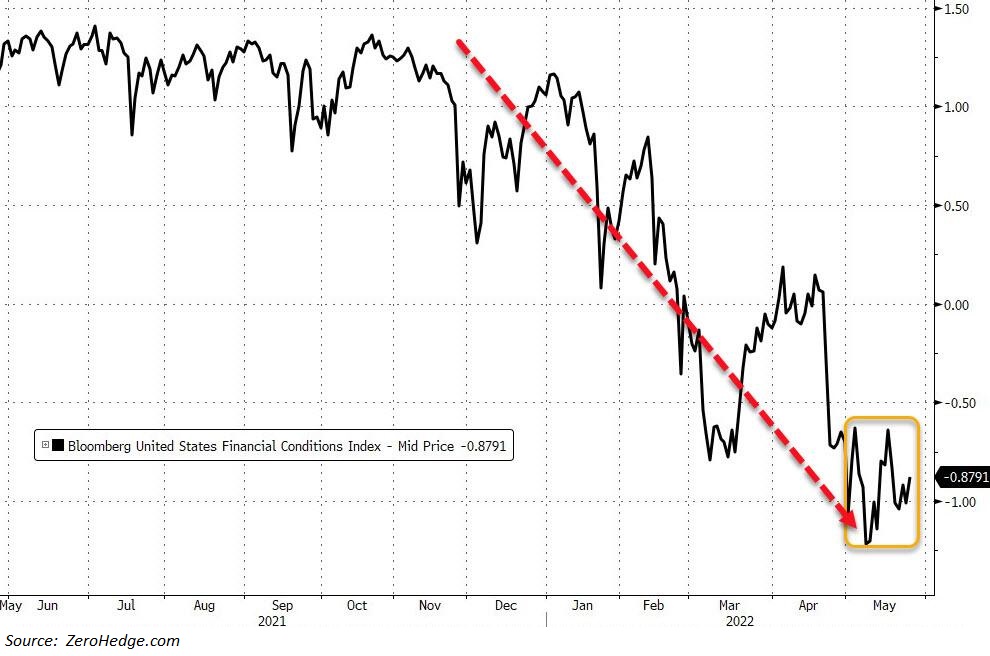 Walmart & Amazon both announced they were "overstaffed" and will reduce their respective workforce in warehouse and distribution centers (by they way, that means inventory is building up and consumer demand is dropping).  In another troubling trend, start-up companies, which depend heavily on staff during the initial 1-3 year period of survival, are announcing layoffs as profits have been cut.  As the days go by, the cracks in the economy appear to increase in size.

Want to Move Ahead but the Boss Won't Seem to Let Me.  Where do we stand with the Fed and interest rates?  This week, the minutes of the FOMC meeting earlier this month indicated the Fed is still hawkish to bring inflation under control. 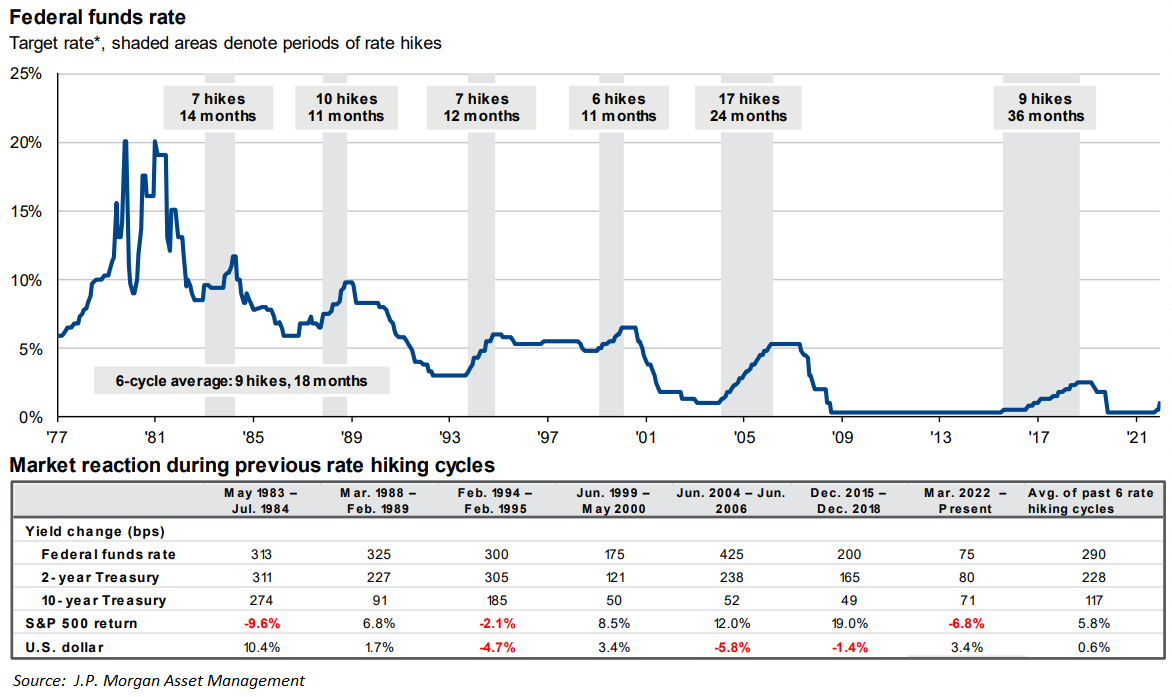 The Fed governors confirmed multiple 50 basis point hikes ahead, and the market seems to be pricing in at least two more hikes of 50 bps.  At the same time, the Fed acknowledged that higher prices are hurting sales - better known as "demand destruction" - and that inflation risks are still skewed to the upside.  If I didn't know better, the Fed seems to be admitting that they are will to crash the economy in order to get inflation under control.  The last 6 recessions (not including 2020) saw the Fed hike our way into a recession.  On average, the Fed hiked 9 times over an average of 18 months and each of those instances led to recession.  We are just 3 months and 2 hikes into the latest cycle.  Where does this one end?