Despite assurances from the Biden administration to the contrary and logical reasons for not invading Ukraine, Russia has just done the opposite.  The invasion of Ukraine by Russia has set the world on uncertain footing and you know what the markets do with uncertainty?  The West has decided to handle the situation with sanctions and that doesn't seem to bother Putin as sanctions against Russia by multiple countries around the world were in place before he decided to invade.  So, let's just get to it - here's what we're seeing so far this week...

Russia Invades Ukraine - What Does That Mean For Markets?  Over the weekend Russia took steps to recognize two provinces on the eastern border of Ukraine for their separtist views. That's one thing, albeit, non-violent.  However, overnight, Russian President Vladimir Putin ordered military operations deep into the heart of Ukraine.  We've been here before in 2014 when Putin sent forces into the Ukrainian province of Crimea and annexed that province into Russia.  First we have to look at why is Russia willing to risk war with the West in order to gain Ukraine.  Despite it's relatively small size in comparison to Russia, Ukraine is about the same square miles as Texas and is plentiful in natural resources.

Since Russia's primary natural resource is oil, bringing Ukraine under Russian governance would allow Putin more resources from which to strengthen the Russian economy and provide him with more bargaining chips on the global stage.  The Biden administration and countries across Europe have announced sanctions against Russia, but Russia has taken steps in recent years, building up foreign currency and gold reserves, to minimize the impact of sanctions. 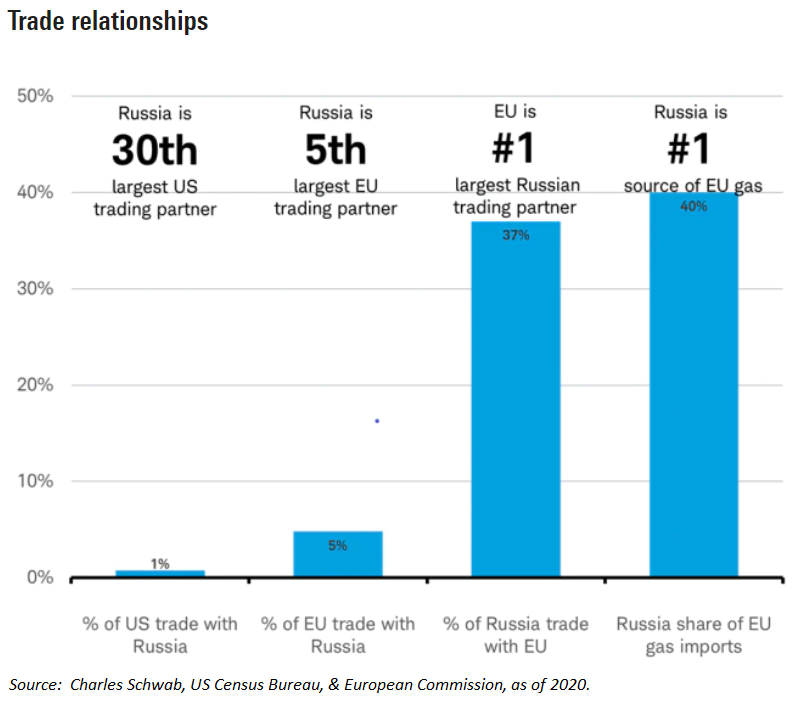 Some sanctions imposed by the U.S. by the Obama & Trump administrations still remain in place.  In fact, according to the Biden administration, sanctions have already worked.  I think the people on the ground in Ukraine would beg to differ.  Regardless, it's unlikely further sanctions will dissuade Putin from his most recent actions.  Other than the price of oil, further sanctions are unlikely to affect US consumers as Russia is not a significant trading partner of the U.S.  Europe, however, is likely to feel the sting of further sanctions on Russia by the West.  Uncertainty remains and Putin's actions could embolden China consider similar annexation actions with Taiwan.

Most major geopolitical events create temporary or short-term shocks to the market, but are rarely long-lasting.  Over the last 29 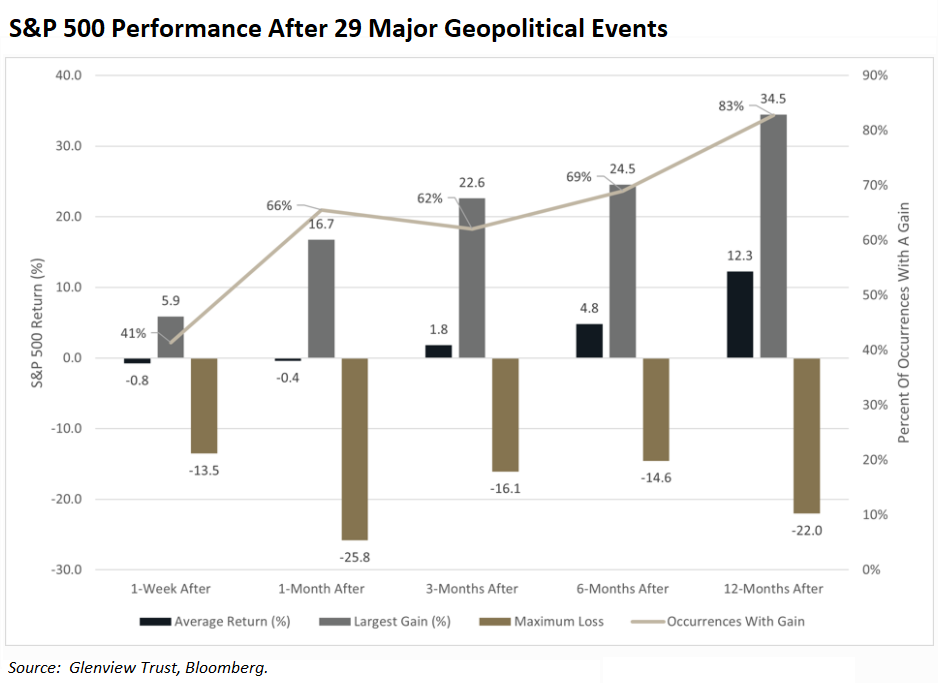 major geopolitical events, the S&P has proceeded higher on average 3mths, 6mths, and 12mths after the initial shock.  In fact, in nearly 70% of the occurrences, the index was higher after the geopolitical shock within 6 months of the initial market decline.  Making major investment decisions based on what could be a relatively short-term event is probably not the best course of action.

What Should Investors Do?  While clients should review their asset allocations to make sure their investments are in-line with their goals and risk tolerance, major shifts to their portfolios at this point would likely be unwise since markets may look very different within 6 months.  The market still expects the Fed to continue on the path of hiking rates. 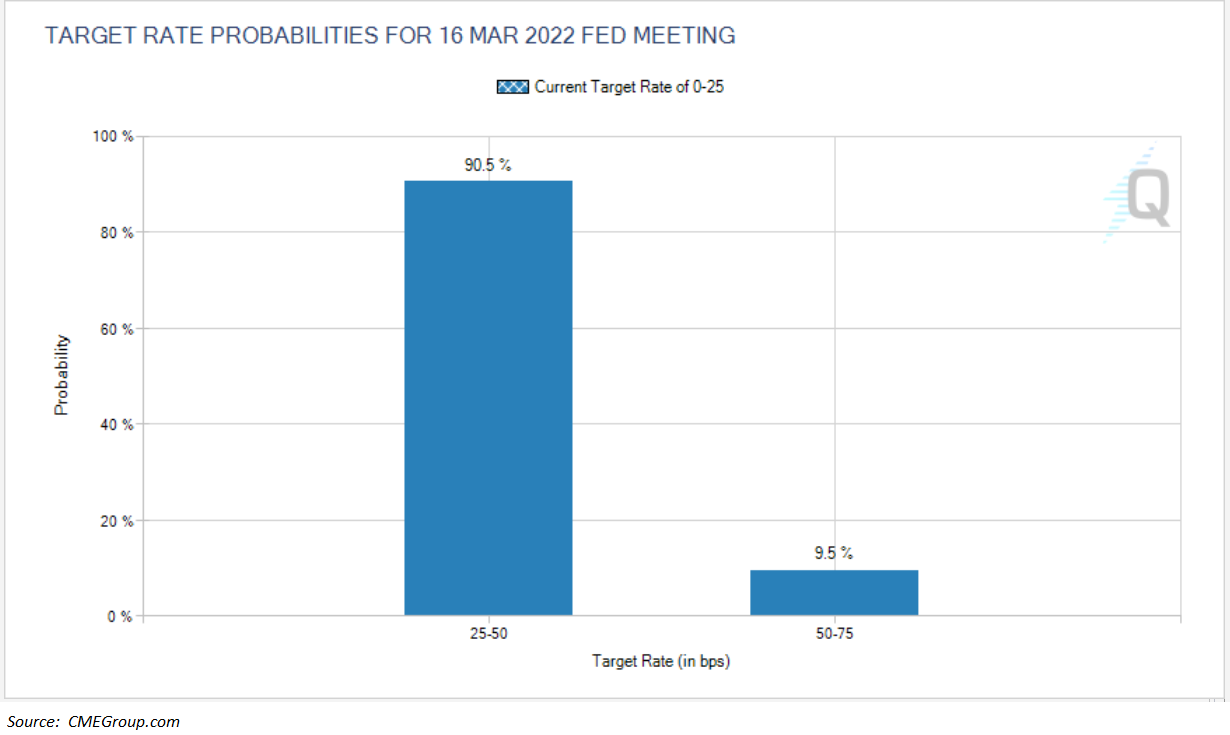 After hitting 100% probability in early February, the odds of a 50 basis point rate hike in March are diminishing.  The current odds have sunk to just 10%, while lower than 50 bps is coming in at a 90% probability.  In fact, Goldman Sachs believes next month's Fed meeting will result in a 25 basis point rate hike.  This may fuel markets going forward as only a 25 basis point hike would allow the Fed to address inflation but also giving markets time to recover from the Ukraine crisis.  The U.S. dollar is rallying today, up nearly 1% and approaching its highest mark of the year.  As of this writing, the S&P 500 Index has turned positive on the day after being down as much as 2% earlier in the day.  Investors who sold out of equity positions earlier in the day only realized losses, while cooler heads may end up with gains by the end of the day.

Our own Wealth Protection Signal, which allows us to determine when it's appropriate to raise cash in clients' accounts, was certainly elevated early in the day today, but not at a level that would recommend raising cash as a defensive measure.  As of this writing, the Signal has now reversed and is 13% lower for the day.  In fact, the Signal would have to more than double to get to the first Cash Raise trigger.

What About The Rest Of the Story?  Meanwhile, the economic releases this week have been positive overall.  We will get more information on the consumer tomorrow with the release of Personal Spending, Personal Income, and Consumer Sentiment.  However, both the flash reading of Manufacturing and Services published by Markit showed the first month-over-month improvement in those two indices in over 3 months.  Both Weekly (initial) Jobless Claims and Continued Claims decreased last week.  The 1st revision to 4th Quarter GDP was revised slightly higher from +6.9% to +7.0%.  Both the Chicago Fed and Kansas City Fed Manufacturing indices improved last month.  Yet, despite the likely short-term effects of the Ukraine Crisis, inflation is not going anywhere.

A recent CBS report used some clever wording to imply that the Ukraine Crisis is the only thing causing consumers to feel pain when it comes to spending.  When, in fact, inflation has been rising for more than 18 months, gas prices have been rising for 15 months, and supply chain issues have been a problem since January of last year.  We can expect gas prices to remain elevated for the time being.  We have talked exhaustively about inflation and that at least 200 basis points additional inflation may still be out there until CPI catches up to PPI or supply chains ease causing inflation to somewhat ease.  The reality is there is no magic wand for inflation at this point, but the Fed and the administration need to bring multiple tools to bear to help pain on consumers.