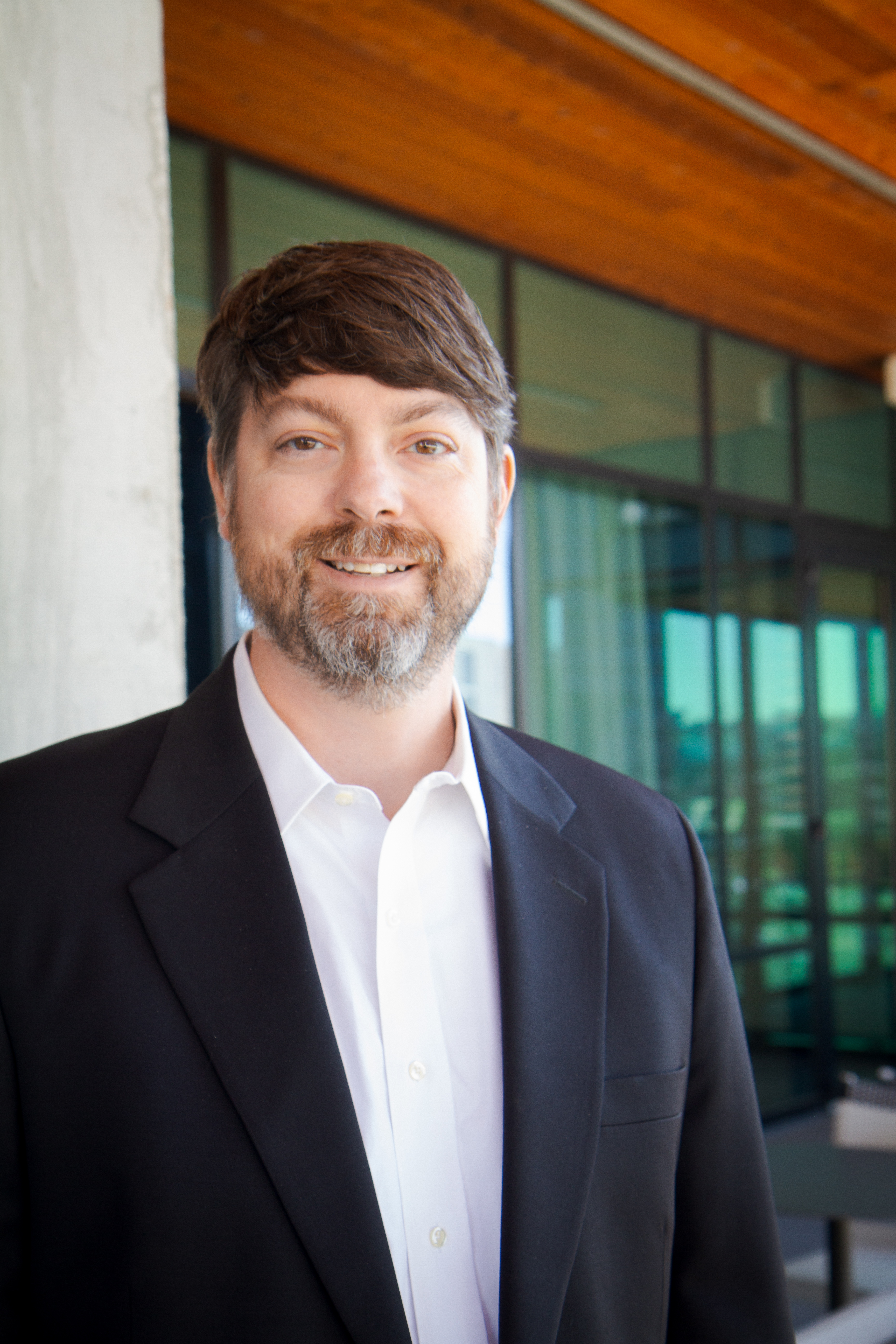 The inspiration for this week's Market Musings comes from the 1993 movie Dazed and Confused. 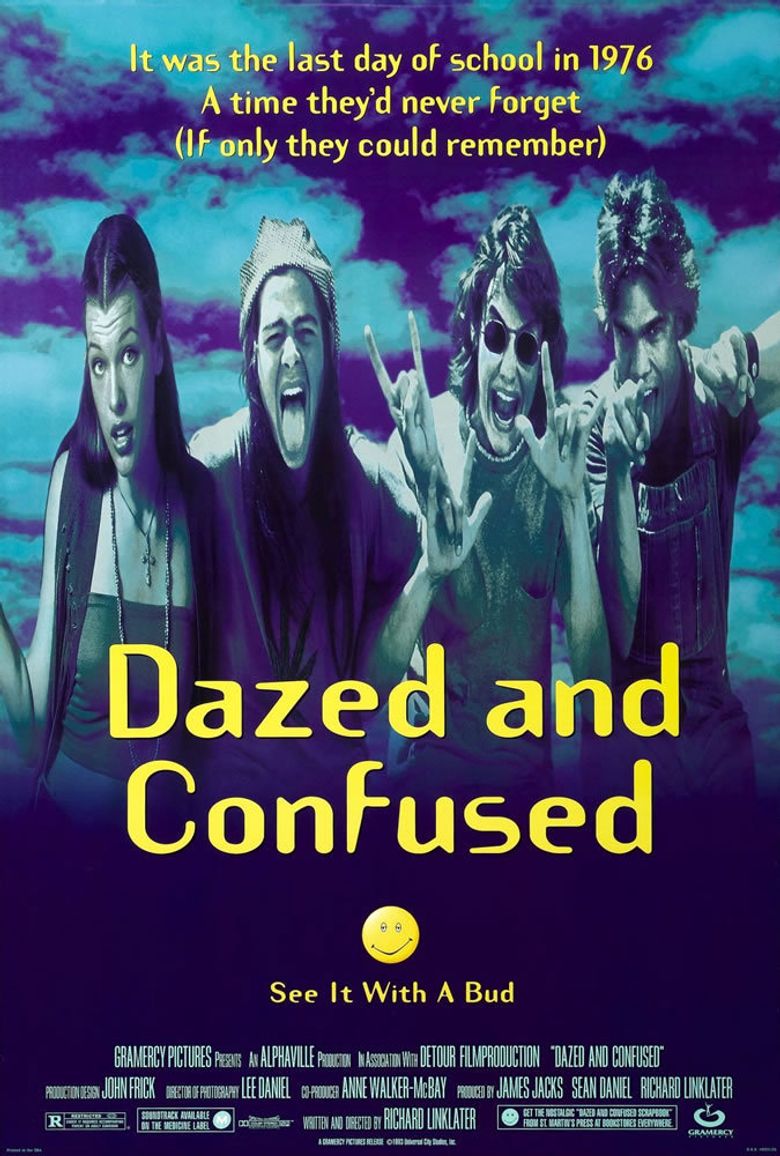 Of course, the premise behind the movie has a different meaning than the current market environment.  However, the movie has become a cult classic, despite the fact that it was basically a failure at the box office.  The movie made only $8 million at the box office, but cost $6.9 million to make.  Yet, the film went on to massive success in the VHS, DVD, & BlueRay market, as well as the soundtrack going double platinum.  Here's some fun trivia about the movie:

•    The film's writer and director, Richard Linklater, spent one-sixth of the film's budget on the music rights to songs like "Sweet Emotion" and "School's Out."

•    Part of the film's fame originated from the fact that it starred many pre-fame actors such as, Milla Jovovich, Anthony Rapp, Ben Affleck, Matthew McConaughey, Parker Posey, and Cole Hauser.

•    Linklater was sued, after the film became famous, for defamation as he used the real names of some of his High School classmates as characters in the film.  The real life Wooderson, Floyd, and Slater were bombarded by kids wanting to party with them.  The lawsuit was eventually dropped.

Investors seem dazed and confused as fundamental data points to recession, but markets are acting as if recession isn't on the horizon. Let's review what we've seen so far this week...

The Fed's Rate Decision.  On Wednesday the Fed raised the Federal Funds Rate by 75 basis points, as expected.  What investors took out of Fed Chairman Powell's press conference afterwards was dovish comments.  We're not so sure of that. 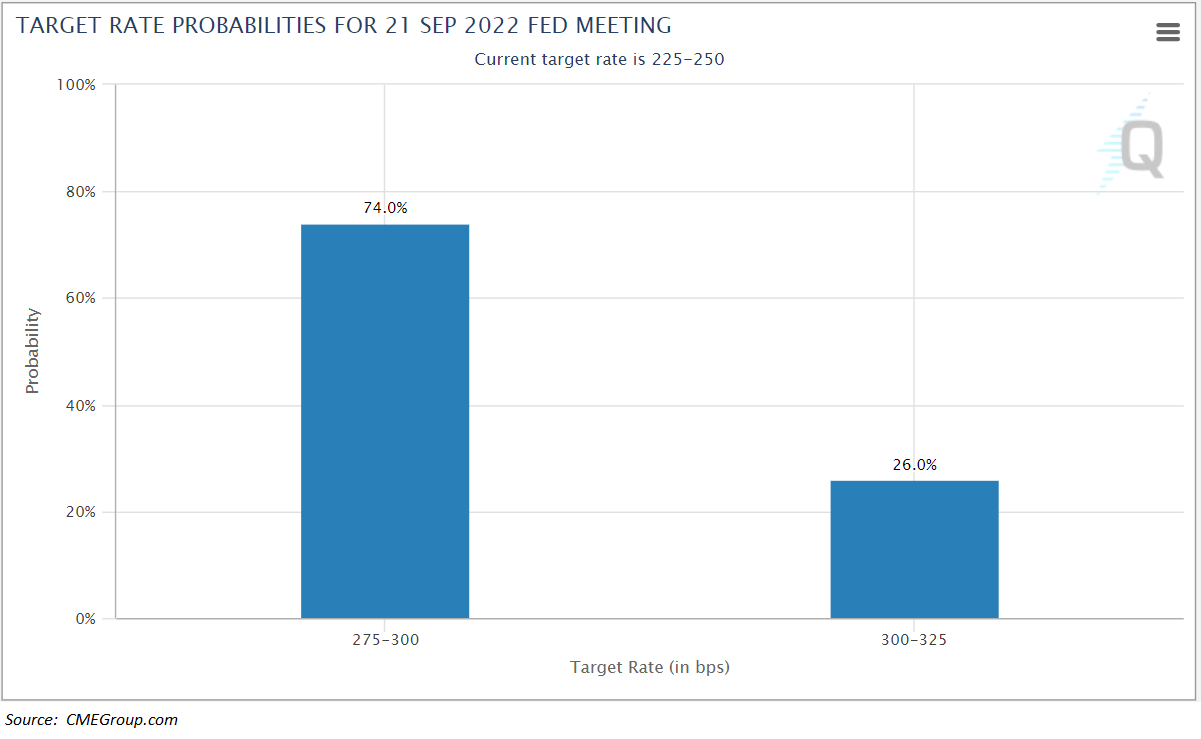 The statement that seemed so dovish was when the Chairman stated the Fed was moving to a "data-dependent, meeting-by-meeting basis" rather than the Committee debating the size of future rate hikes.  Investors have taken this to mean that a Fed "pivot" is on the horizon.  Equities have turned bullish on this small change in language.  When we parse the language of the actual statement from the Committee, not much really changed.  However, the Committee did note "indicators of spending and production have softened."  You don't say?!  Other than that change, the statement offers no clues about September's rate hike decision.  Although, futures are pointing to a 50 basis point rate hike at the next meeting.  We think that wagering on a friendly Fed is premature.  Have Fed officials learned from their mistakes in April?  In that month, the Fed talked down the size of rate hikes, which prompted the market to question the Fed's resolve to fight inflation.  Equities dropped nearly 9% in April as a result.

What Is The Definition Of A Recession?  It seems these days that when a public figure wants to avoid a conversation or change a narrative, the definitions of words are simply changed for convenience.  The folks at Merriam-Webster can take comfort in their job security as they are seemingly re-writing the definitions of words on a daily basis.  The latest example is how the definition of a "recession" has now suddenly shifted. 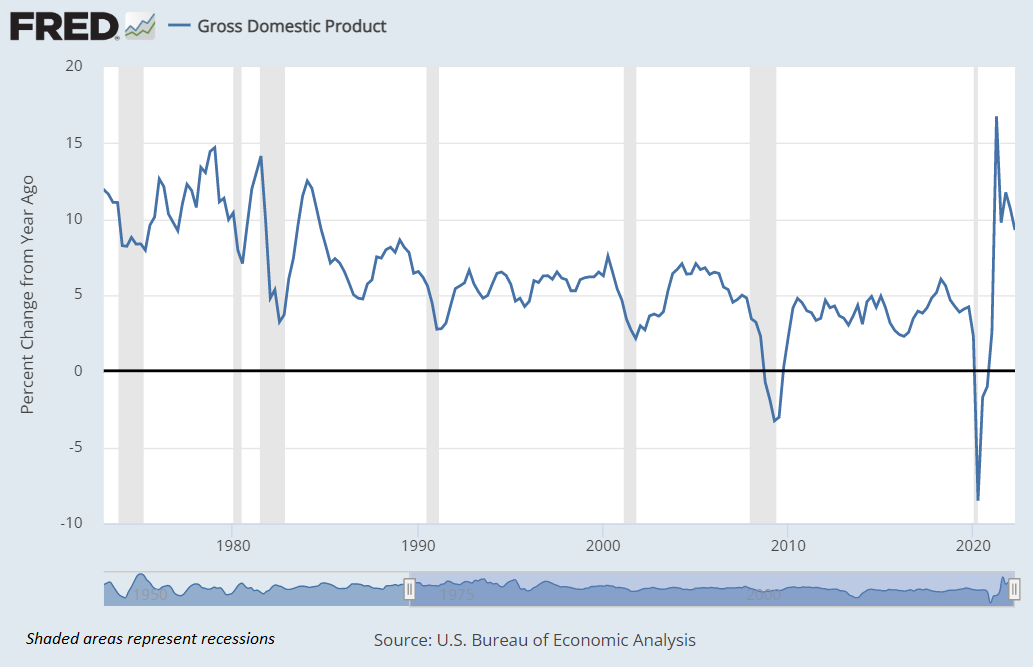 Since 1974, the widely held definition of a recession came from economist Julius Shiskin.  Shiskin was a professor of economics and statistics at Rutgers University.  He subsequently served as the chief of Economic Research and Analysis at the U.S. Census Bureau from 1945 until 1969, when he then joined the Office of Management and Budget under then President Lyndon B. Johnson.  Shiskin's definition of a recession is "two consecutive quarters of negative GDP growth."  Since the Federal Reserve still points to GDP as the primary measure of economic activity, it would seem that negative GDP growth is still a valid determination of what constitutes a recession.  In fact, in the graph above, from the St. Louis Federal Reserve's website, each shaded area going back in time represents a recession, simultaneously accompanied by two consecutive quarters of negative GDP growth.

Well, early this week, that all changed.  On Sunday, Treasury Secretary Yellen stated "what a recession really means is a broad-based contraction in the economy, and even if that [Second-quarter GDP] number is negative, we are not in a recession now. I would warn that we should be not characterizing that as a recession.“ 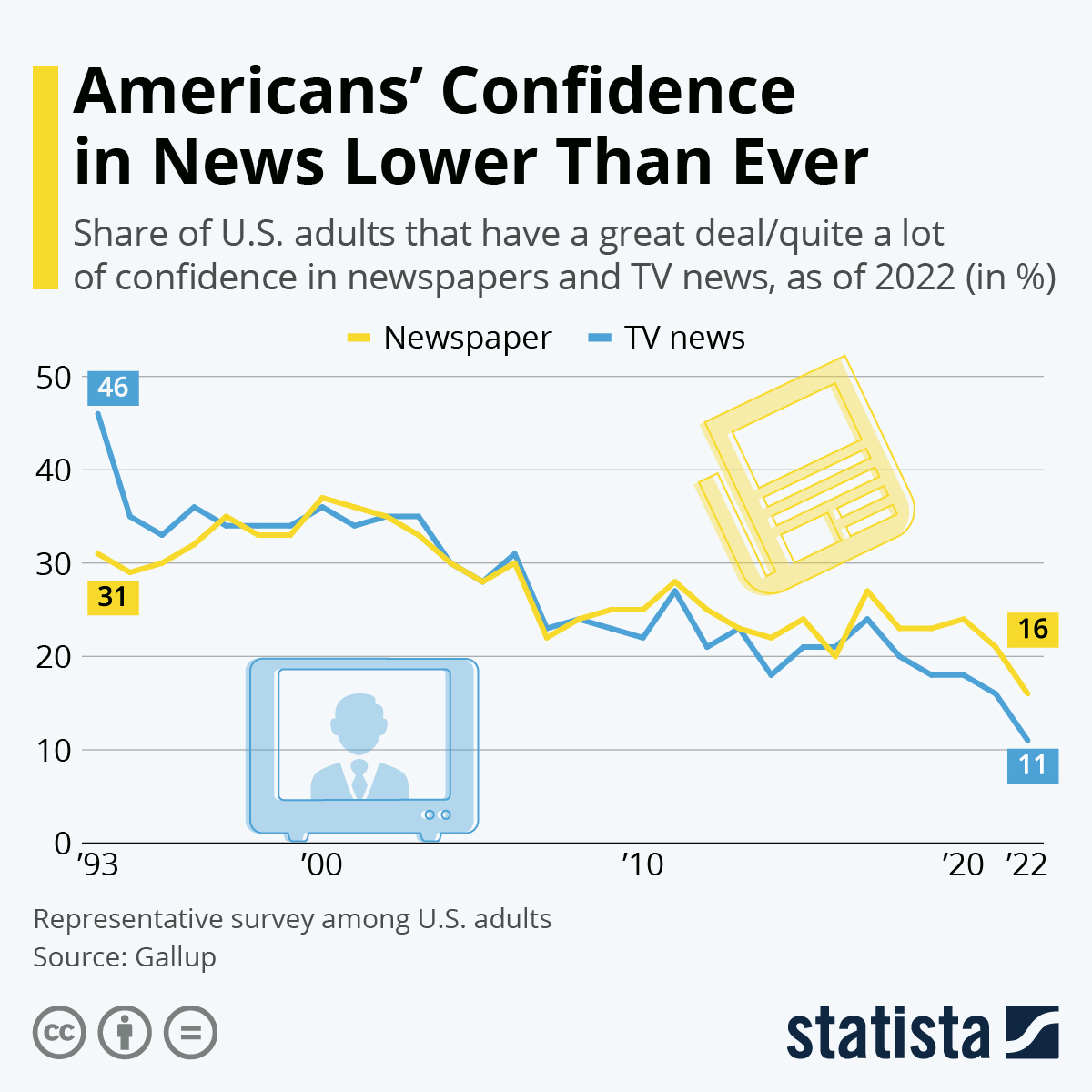 She then followed those comments yesterday with, "the U.S. economy transitioning to steady, sustainable growth.”  We can argue whether we are truly in a recession (which we will in a moment), but the national media, with a particular bias, has picked up the proverbial flag and run with it.  Within hours of Secretary Yellen's comments on Sunday, major news outlets (including, but not limited to CNN, Business Insider, Newsweek, MSN, Yahoo, & AP) quoted the Secretary and devoted numerous articles in defense of the new definition.  It is any wonder Americans have lost confidence in the news media?  The reality is the definition of a recession has not changed, just the inconvenience of it.

Now That We Know What A Recession Is, Are We In One?  This part of our current predicament is not as easy to answer.

Technically speaking, we are probably in a recession.  However, it may depend upon which metric you use.  If you look at the actual dollars (in billions) of quarterly GDP (see graph to the left), there was some actual growth in Q1 & Q2 - if ever so slight.  However, if you consider the percent change in GDP versus one year ago (see graph

to the right), Q1 & Q2 show consecutive declines - which meets the definition of a recession.  If we use Real GDP (which is inflation-adjusted), the picture is a bit more clear as the quarter-over-quarter decline is more visible due to the rise in inflation over the past 23 months.

We don't need just GDP as a measurement of economic declines.  Even if we use the definition provided by the Treasury Secretary, we 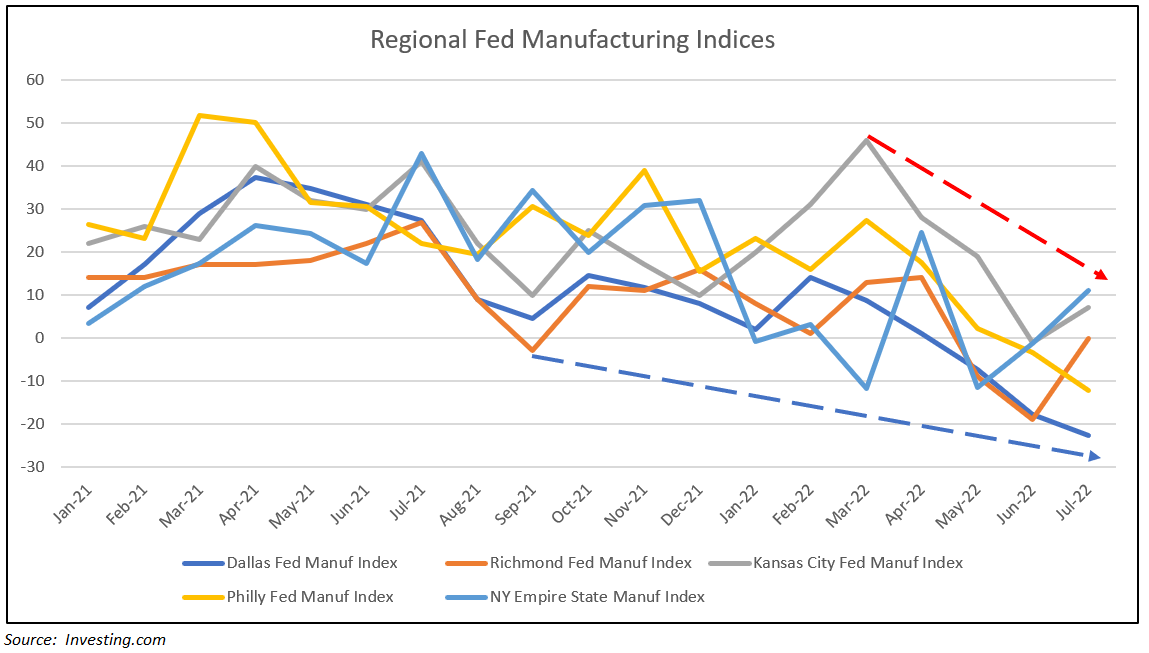 can determine the slowdown in the economy noteworthy enough to be a recession.  The regional Fed Manufacturing Indices have been in a general decline since September of last year.  The housing market is in decline as homes are staying on the market longer (compared to last year) and New Home Sales, along with Existing Home Sales, have been in decline since last year.  The NAHB Housing Market Index confirms as much, as that 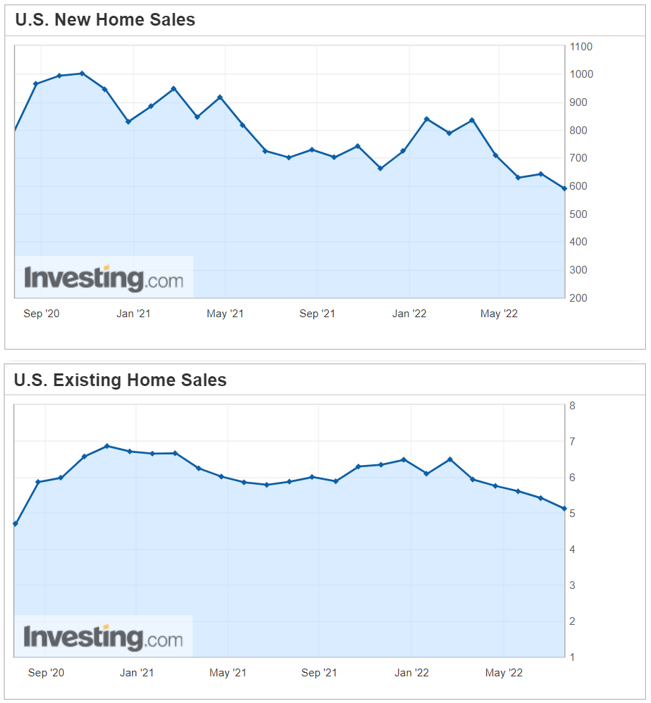 measurement is at levels not seen since the beginning of the pandemic.  To top things off, the labor market, which has been a bright spot, is showing signs of tightening.  Companies are actively freezing hiring and beginning layoffs.  Initial Jobless Claims increased for the 8th consecutive week and hit fresh 6-month highs.  Continued Claims remains somewhat steady, which just a slight trend higher over the last 5 months.

Dazed and Confused.  Despite all of the fundamental evidence, investors are increasing their appetite for risk.  The S&P has now closed above its 50-day moving average for 7 consecutive days.  Investors, according to Goldman Sachs Group Inc. strategist Christian Mueller-Glissmann, are back to believing "bad-news-is-good-news again."  Investors are thinking that if things get bad enough, the Fed will be forced to pivot on rates and begin lowering again.  This theory depends primarily on inflation and the consumer.  If inflation has peaked, perhaps the theory has merit. 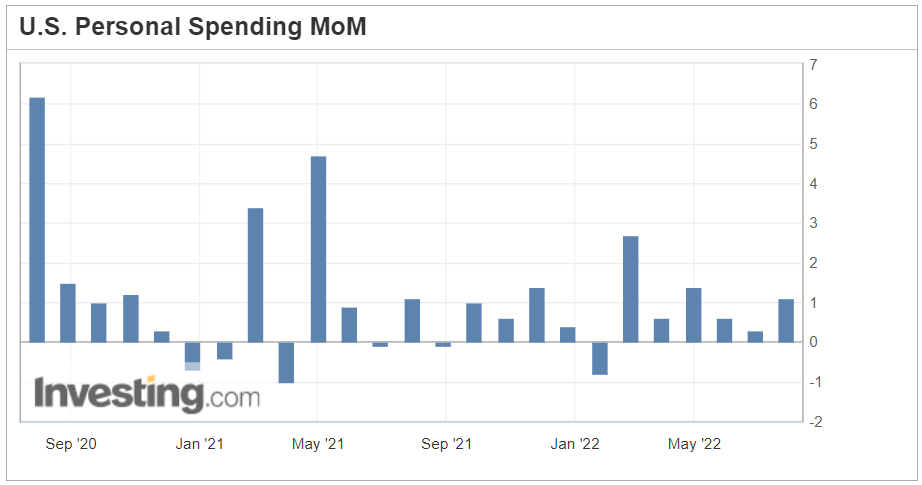 However, as we discussed last week, there are no signs of inflation peaking until Producer Prices (PPI) peaks and Consumer Prices (CPI) exceed PPI.  We learned this morning that Personal Spending for June jumped 1.1%, after two consecutive months of declines.  If consumers continue to spend, especially after getting a reprieve in gas prices, then the speed of money (inflation) will continue to rise - thereby, forcing the Fed to continue with rate hikes.  For this reason, we caution investors not to bite on the current rally.  If you are a long-term investor with more than 20-years before retirement and you have a high risk tolerance, it could be appropriate to make some reasonable equity investments in this environment.  However, if you are a retiree or soon will be, now may not be the time to step back into equities.